This blog post was created for Chuck Wendig’s FLASH FICTION CHALLENGE: SHARE AN IMAGE, WRITE A STORY. The idea is to write a story based off of an image someone else provided. I picked two images that I merged for the below effect:

Jeannie looked up just in time to see the giant arthropod about to wander into the road. Instinctively, she slammed on the brakes; whipping both women back like willow brances when the Ford Pinto Fusion came to its full and sudden stop.

The large insect stood by the side of the road and looked around. Its antennae flicked back and forth leisurely.

Looking to her passenger, Jeannie smiled. “Well, I think – oh fuck. Are you ok Beth?” The other woman was looking around slightly dazed. A large, red swelling had already started to form on her forehead.

“Like hell you’re fine. You must have hit your head on the dashboard. Let me just -” She paused for a moment to look around at their surroundings. “Let me just pull in to the gas station over there and see if they have some ice. For the swelling.”

The huge brown beast’s attention finally fell on the near by vehicle, and it began slowly sauntering up to it.

“The wasp. It’s a paper wasp. A giant paper wasp-”

Beth’s words were cut off as the big bug placed its forelegs on the side of the car and pulled itself up to look inside. Though it was only the size of an Irish wolfhound, it still managed to rock the car.

Jeannie flicked her hand back at the wrist in a dismissing motion. “Forget the fucking wasp. You’re hurt.”

“Yes, but Meredith lost a paper wasp, didn’t she? With clipped wings, like this one? We should at least check her tags-”

The car rocked again as the the wasp shifted its weight.

“Fuck Meredith and her fucking wasp.”

The two women sat there in silence for several moments before the car shook again. The giant wasp pushed itself off the car and started to meander away.

Beth turned to look at the insect slowly milling about the grassy embankment. “You wouldn’t like it if Rupert was missing.”

“Rupert is a two year old, male bumble bee. Its a miracle he’s alive as it is.”

Beth forced a disapproving “eh” with a sharp exhale.

“Don’t give me that-” Jeannie mimicked Beth’s “eh” before continuing. “Most male bumble bees don’t live more than a few months. Rupert’s second birth day was-”

“And?” Beth shot, still looking out the window at the aimless bug. In turn, the wasp was looking at the grating on a storm drain.

Jeannie didn’t respond for quite some time. She just looked at the back of the other woman’s head. Turning to look down at the steering wheel, she finally responded. “Rupert is a kind and gentle animal. He’s vegetarian. He’s doesn’t have a stinger. He’s nice an furry. I mean, the local kids and cats love him.”

“The local cats love him because he feeds on that giant catnip plant growing in your back yard.”

“That helps too. But, my point is that everyone likes him – he’s friendly, gentle, and harmless.”

“And Meredith’s wasps are anything but. With their venom-filled stingers and generally anti-personal personalities. And lets not forget she keeps a whole nest full of them. And she’s ‘clipped’ their wings.” Jeannie made air quotes with her fingers when she said ‘clipped’. “Jesus, Mary and Joseph-”

“Really?” Beth interjected, snapping her head around to look at Jeannie. Almost immediately, Beth closed her eyes and gripped the dashboard to steady herself.

“Really.” Jeannie replied without looking up. “You can’t clip an insect wing. They’re not like bird wings-” Glancing over at Beth, Jeannie stopped in mid-sentence. The welt on Beth’s forehead was now red and blue, and had swollen to the size of large egg. “Jesus-”

“What? I’m Jewish and you’re Buddhist.”

“And we were born Catholic.”

“No one is born Catholic. That’s why they baptize babies who are in critical in Catholic hospitals-”

“Whatever. We were raised Catholic.”

“And we converted. Anyway. Look.” Jeannie stated forcefully, turning the rearview mirror so Beth could look at herself in the mirror.

Watching Jeannie struggle to carry the one pound bag of ice to the car, Beth couldn’t help but laugh. The other woman wobbled precariously on her impractically tall heels on her way to her car.

“Laugh it up.” Jeannie said as she endeavored to open the car door while juggling the amorphous bag of ice and her rather expensive Italian leather handbag. She was doing her best to make sure they didn’t touch, and failing miserably.

“I’m glad I amuse you. Catch.” Jeannie shouted to Beth once the door was open. Remarkably, Beth managed to catch the bag of ice like a pro.

“I thought we were getting ice to help treat my trauma – not to traumatize me further.”

Closing the door behind her, Jeannie slipped into the car and out of her shoes. Popping open her purse, she fished inside briefly before pulling out a small, plastic sandwich bag. “You would never believe the guy in there. I said I wanted a cup of ice – and he refused.”

“Because they inventory the cups and the cups have costs.”

“That’s what he said – but one cup can’t cost that much.”

Beth glanced away and rolled her eyes. While Jeannie continued speaking, Beth opened the larger bag of ice and put a few cubes in the sandwich bag.

“So, anyway, I told him about the wasp and he let me use the phone to call animal control. They should have a nuclear entomologist up here shortly.”

As she leaned her head back against the headrest, Beth gently pressed the ice against the bump on her forehead. Gazing out the window, she saw that the giant wasp had turned around to look at the road again. It seemed to be watching the traffic zip up and down the street.

“Do you remember what life was like before the meltdown?” Beth asked.

“Well, I was like six when the reactor went critical-”

Jeannie immediately interrupted the younger woman. “And I was only eight. I’m not that much older than you.”

Unseen by Jeannie, Beth rolled her eyes again. “Anyway. I’ve never been out of the county either. So I don’t know life any other way.”

Jeannie shrugged, even though the younger woman couldn’t see her. “Well, we didn’t have giant plants or bugs. We didn’t have to deal with zombies either. I’m just glad they’re the slow, shambling, not-highly-infectious kind. But,” Jeannie continued, pulling a glowing bottle out of her bag. “then again, we didn’t have this either.”

Beth turned to look at what Jeannie was referring. They both smiled and said in unison “Worth it.” 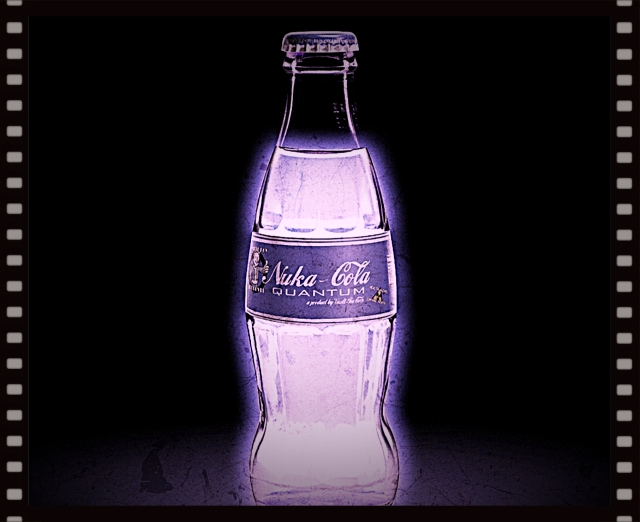 The image from the top of this post was created by merging and editing two images provided by Kristin Mireles and vlsperry in the comment section of Chuck’s blog post (mentioned earlier). The other image was derived from a Nuka-Cola Quantum picture I found floating around the Internet. Both images were created without consent from the original photographers, and I believe the images’ creation falls under fair use. If the base pictures are yours, and you disagree, please contact me.